The Sultan Haji Hassanal Bolkiah Foundation (YSHHB) will for the first time be holding an 'Award in Islamic Literature' ceremony to honour writers who have produced high quality work. This is in view of the development of literature writing - particularly Islamic literature - which has undoubtedly won the hearts of the community here.

His Royal Highness Prince Haji Al-Muhtadee Billah, the Crown Prince and Senior Minister at the Prime Minister's Office is expected to grace the upcoming award ceremony. Prior to the award ceremony, HRH will deliver a sabda announcing the recipients of the 'Tokoh Sasterawan Islam Brunei' and 'Pelopor Kesusasteraan Moden Brunei.' The award ceremony will be held once every three years, with the first one scheduled to be held on November 5 at the International Convention Centre.
YSHHB Managing Director Dato Paduka Hj Ali Hashim Hj Mohd Daud and Language and Literature Bureau Director Dr Mataim Hj Bakar disclosed this yesterday duri…
Catat Ulasan
Baca lagi

Cultural diversity is the heritage of mankind that every nation hopes to preserve, transmit, and modify their culture. Thailand is located in the territory of tropical zone where there are abundant ecological resources, namely, mountainous and lowland areas in the mainland, coastal terrain, and islands. These ecological differences enhance ethnic diversity in all regions of the country. There are, at present, more than sixty language groups being used throughout the country. Ethnic diversity in Thailand can be observed in the differences not only in languages, but also in lifestyles, traditional costumes, religious practices, and Cosmo vision. Therefore, Thais and other people of different ethnic origins are familiar with this cultural diversity. In addition, Buddh…
Catat Ulasan
Baca lagi

Thanksgiving for Deputy Minister of Education after SEAWrite Award win

The recipient of the SEAWrite Award 2008 called for quality literature works of previous winners to be translated into Arabic and English for wider readership, as well as devising workable strategies to market the Sultanate's literary products to other Malay-speaking nations in the region.
Deputy Minister of Education Pg Dato Seri Setia Dr Hj Mohammad Pg Hj Abd Rahman also called for the region's literature works to be made available here, as the country has not many quality writings that can help nourish interests in literature."Without easy access to regional literature, we are not able to gauge our standards. It is also hoped that locally published books will be given promotion, so that the population, especially the new generation, is aware of any new publications," he said at a thanksgiving ceremony dedicated to him last Saturday night.The event held at the Rizqun International Hotel in Gadong was attended by Legislative Council member Pg Setia Negara Pg (Dr) Hj …
Catat Ulasan
Baca lagi 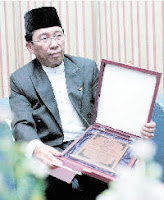 The deputy minister, as the Bruneian representative, was granted this year's prestigious award, which is given to regional writers by Thailand, for his fourth anthology of poems entitled, "Rinduku" (My Yearning).
Pg Dato Dr Hj Mohammad is the 23rd recipient to receive the award since Brunei first joined in 1985, a year after its independence.The event took place in Bangkok where the deputy minister was handed the award by Thai Princess Maha Chakri Sirindhorn.
Pg Dato Dr Hj Mohammad hoped that it will create a benchmark for other local writers to be more motivated in submitting their work. Inspired from experience and the love of writing, the deputy minister said that young writers who want to pursue this art should take it seriously, be it in different genres su…
Catat Ulasan
Baca lagi
Lagi catatan