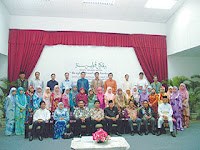 The Director of Language and Literature Bureau, Dr Mataim Bakar, was present as the chief guest at the commencement of a three-day Literature Writing Workshop organised by the Tutong Writers Group with the cooperation of the Language and Literature Bureau.
Before officially opening the workshop, Dr Mataim delivered a speech in which he said that the effort to carry out the workshop is an effort that should be praised as the writers group from the Tutong District have come forward to answer the call made by the Language and Literature Bureau to together help make literature project in the country a success.
Workshop participants will be able to gain knowledge in the world of writing, which is very important as the core to produce a work of art that has a high thinking quality that could contribute to the development of the country.
This is proven in the material written by Al-Marhum Pengiran Shahbandar Mohammad Salleh Ibnu Pengiran Sharmayuda about an incident that happened upfront, as well as in the article written by Al-Marhum Sultan Haji Omar Ali Saifuddien that may be used as a guideline in developing and administering the country.
Parents feel that Bahasa Melayu and Malay Literature is no longer important and see the subject as a second class subject which does not secure the future and does not portray any roles in developing the country.
From this point, writers need to change their mindset by writing about bigger issues and not something irrelevant as what His Majesty Sultan Haji Hassanal Bolkiah said in his royal address at the celebration of new year Hijrah 1429."This is the role of awareness. It must and needs to be stimulated and because of that I applaud the propagation and motivation steps in whatever form that aim to raise awareness in the community to immediately change for the better."
The aesthetical strength in literature will be able to spur the community movement from passive to more proactive, from the point of static to a more dynamic, from a narrow mind to a global mind, and from a conservative thinking to a qualitative thinking.
This workshop is participated by some 35 individuals who possess interest in writing and is being conducted at the Language and Literature Bureau in the Tutong District.
[Artikel ditulis oleh RDN, Borneo Bulletin Weekend, Sabtu 19 Januari 2008]
Puasha
Nama sebenar ialah Puasa bin Kamis. Antara lain dia juga pernah mengunakan nama pena Awang Puasa, Yasa Kamis, P. B. Kamis dan Puasha dalam bidang penulisan sajak, cerpen, novel, rencana umum dan skrip drama televisyen. Mula menulis pada tahun 1985, dan kebanyakan karya terbit di Majalah Mekar, Juara, Bahana, Dewan Sastera (Lembaran Mastera), URTV, Pelita Brunei, Media Permata dan Radio Televisyen Brunei. Pernah memenangi Hadiah Kreatif Bahana DBP - Shell, Brunei pada tahun 1995 (sajak), 1999 (cerpen) dan 2002 (haiku). Dia adalah penerima Hadiah Penghargaan Sasterawan Muda Majlis Sastera Asia Tenggara (MASTERA) bagi Negara Brunei Darussalam pada tahun 2010 di Jakarta, Indonesia.