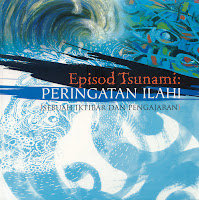 We know,
you are steel-strong nation
not a flower-nation that easily droops.
Even in sorrow,
you never surrender.]

The poem above was written after Tsunami had just hit Aceh and some part of North Sumatra, by Adi Rumi, a respected senior poet of Brunei Darussalam. He read it at a gathering of Indonesian and Bruneian writers. The poem was published, together with dozens of other Tsunami-related themes, in memorial volume entitled Episode Tsunami: Peringatan Ilahi, by Dewan Bahasa dan Pustaka Brunei. In Indonesia, the book is on sale for Rp 250,000 ($42) — a stiff price for a book of literature in Indonesia.From the lyrics above, it is clear to us that in terms of format, theme, and style, most Bruneian works of literature are conventional.

The writer just expressed his mind, using everyday language, simple and clear. This style is used by the majority of Bruneian writers. For a small country, Brunei has quite a big number of literary writers.Bruneian Zeffri Ariff, now studying for his PhD at University Malaysia Kuala Lumpur, in one of his papers, presented at the Pertemuan Sastrawan Muda Malaysia (Young Malaysian Writers Meeting) in Pontian, Johor, Malaysia, recently, divided Bruneian writers into five groups. The first group are those writers who received the SEA Writer Award, such as Muslim Burmat, Yahya MS, Yura Halim, Adi Rumi, Mussidi, Badaruddin HO, A Hashim Hamid, Jawawi Ahmad, Norsiah MS, Rosli Abidin Yahya, and others.

The SEA Award is like the Nobel Prize for Literature in the Asean arena and is awarded by the King of Thailand every year to a prominent Asean writer. The second group are the "established" writers, including Adi Misere, Mas Malinja, K Manis, Rahim Dulani, Shawal Rajab, Salmi Mesra, Kiflee Tarsad. Zeffri calls the third group the "Pelungsur" — those who are frequently on stage — such as Morsidi Mohammad, Mas Osman, Chong Ah Fok, Pudarno Binchin, Sosonjan Akhan, Aminah Mokmin, Hidop Zin, Julaihi Abdullah, PG Metassan, Yaakob Metali.

The fourth are the "Peluncur" — those who are on the surf. Ariff includes himself in this group, together with Nurul Hikam Din, H Mar, Shariani HI, Amelly Ann Kissing, Puasha Kamis, Disa, Faridah Hamid, Filzah Jawawi.The fifth group are those who are still atruggling to get their names noticed. They are "the 21st century writers". Among them are Adi Swara, DK Rashidah, and Enu Kasi. According to Ariff, many young Bruneian writers are trying to find a new voice, create a new style of expression. They have felt fenced in too long, he contends, by an old-style tradition of poetry and have been using conventional language and format.

They want to go out of the shell, using their own style of expression.But, Zeffri says, the search for a new style is not an easy quest for writers. Not that the young writers are not daring enough to explore new possibilities in language and themes; however, they have to abide by the strict norms and values prevalent in Brunei Darussalam. They have to choose their words carefully, rein in artistic license and avoid writing about sensitive themes as well. This is a big difference with the experience of writers in Indonesia, which is quite liberal. In Indonesia, one can write about literally any theme using any form of expression and get published.

My own personal observation of their writings in the literary magazine Bahana, published by Dewan Bahasa and Pustaka Brunei, is that almost all of the writers mentioned above, regardless of the group, use a conventional style. They also choose similar themes, mostly religiosity. A newcomer or reformer of sorts who attempts to write differently, would thus instantly stand out, regardless of the quality of his writing.When Mussidi emerged with his caricature short stories, similar to the style of famous Indonesian writer Putu Wijaya's realistic life-stories tinged with the absurd and an unconventional approach, he became a hit in Brunei.

In an instant, Musidi's name rocketed and he was soon included with the first group: he was awarded the coveted SEA Writer Award because he was different and was deemed to pionneer a new trend in Bruneian literature. After being "fed up" in a pond of conventional literature, people applauded Mussidi as the reformer of Bruneian literature. But he didn't enjoy the limelight for a long time. Another young newcomer emerged, Pengiran Metassan, who dared to write what had previously been considered taboo, namely, quite risque{aac} stories with Bruneian characters who have concubines (isteri simpanan) in Indonesia.

Metassan has a funny and satirical style, for example, when he writes about the direct relationship between sensuality and the sociopolitical conditions of various countries, although his stories are often odd and a little bit bombastic. However, a great number of critics condemn Metassan for the crime of importing what they term an "obscene Indonesian standard" of literature which, in their view, would damage the morality of Bruneians.Yet, to this day, Bahana publishes Metassan's stories despite his "insensitive" choice of themes, such as marital infidelity and sexual adventurism.