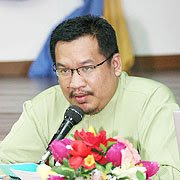 Literary writers from Brunei Darussalam, Sabah, and Sarawak will join their counterparts in Labuan for a two-day gathering entitled "Dialog Teluk" from November 14 to 16, in an effort to seek a common platform for greater and wider cooperation in literature.

Two officers from the Language and Literature Bureau, Suip Hj Wahab and Mohd Ardy, will be attending the event as official representatives of the agency.

The Literary Writers Association of Brunei Darussalam (Asterawani) will be represented by about 25 members, led by the club's secretary Hj Jawawi Hj Ahmad.

Two members of Asterawani, Hj Jawawi Hj Ahmad and Mohd Zefri Ariff, will deliver their working papers at the gathering.

The venue for the gathering will be Sara Hotel at Jalan Dewan, in the city centre, which will also be the official hotel for the dialogue participants.

A performance stage at the open-air food stalls near Sara Hotel will be used for activities in the evening such as poetry recitals and theatre performances.

The literary writers will leave the Sultanate from Serasa Ferry Point on November 14 for the one-hour sea voyage to Labuan.

They are expected to be welcomed by members of Persatuan Penulis Wilayah Persekutuan Labuan (Perwila) and as in their previous gatherings, the writers will be joined by their counterparts from Indonesia, Malaysia and the Philippines as observers.

Meanwhile, members of Astrawani who wish to join the gathering should contact Hj Jawawi Hj Ahmad.