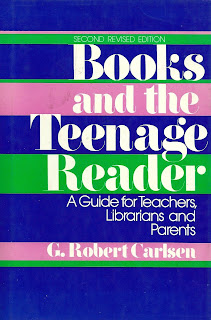 The first great flood of books for teenagers was in the United States; but since World War II, writer all over the world have been creating a similar literature for their own young people. This is said to be the golden age of teenage literature in Australia and Sweden, and masses of books published in England for their own teens are crossing the Atlantic to be read by American adolescents.

Some German, French, Norwegian, Swedish, Czech, and Russian teen books are reaching our shores via translation. In addition, many books written by American authors who have often lived in other parts of the world and have an intimate knowledge of the culture, people, and locale, have a foreign setting and charaters. The Shadow of a Bull by Maia Wojciechowska is an American author's evocation of a teenager's problem with traditional expectations in Spain.

Translated books are difficult for the American teenager and are therefore less popular than books written by American. A German author does not have to explain to young Germans the customs, institutions, and slang they are already familiar with, but the American teen bogs down in unfamiliar details and loses the story line. Even in British books a term like "estate living" suggests a wealthy person to the American reader when it actually refers to government housing for the poor built on estates.

However, translated books give a better sense of the similarities of teenagers the world around. The American book about a foreign culture provides the needed informational exposition, but it also tends unconsciously to contribute to a sense of cultural distinctiveness.Writing as an outsider, the American tends to fall back on cultural stereotypes, which may unfairly color the characterization. You will find it easy to see this if you read a British book written by an Englishman about American teenagers in an American setting.

Thus teachers and librarians should encourage the young to read translations as an avenue to intimate understanding of another culture. It is important to recommend up-to-date books, so that the young reader does not build an outmoded picture of a foreign culture.